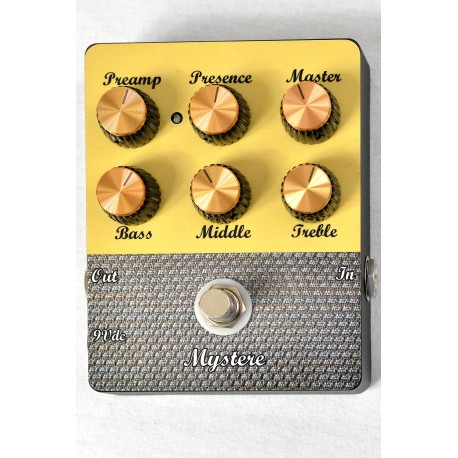 A real preamp 100% analog that you can connect either in the instrument input of your amp, but it will be fully expressed directly in the return of the effects loop, or in a simulator CAB for direct send to mixing desk.

A total of 6 control buttons (preamp, presence, master, bass, middle and treble) that will allow you to reach the sounds that have made the history of rock since the 80s, ranging from a clean to a crunch intense.

The pedal is protected against overvoltage and reverse polarity.

Since 2020, the operating LED indicator has been integrated into the switch and brings a touch of modernity.

Consumption of the order of 15mA. 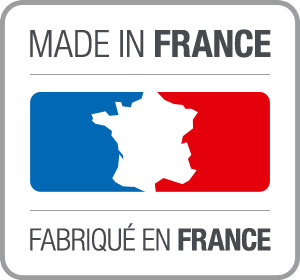 Hand Made In FRANCE by DOC MUSIC STATION

SOUND:
The Mystere, by Doc Music Station (France) is a fully analog preamp, allowing you to achieve the tone of a Marshall JCM800 in a pedal. The JCM800 is one of the most popular Marshall amps (used by Clapton, Hetfield, Wylde and many others) producing excellent singing highs for leads, but also unmistakable crunch tones. The Mystere is no exception. Turn up the Preamp just a little and you get a bit of bite, ideal for some dirty rhythm and some Blues leads. But as you crank the Preamp you get that in-your-face 1980s biting tone. The Presence knob seems to work very well with the Preamp, as you can have the Preamp rather high and it doesn’t sound nearly as dirty if the Presence is low or off, but as you increase the Presence to about 9-10 o’clock the Mystere really comes to life. I also was impressed with the Bass, Middle and Treble – not so much the range of each, but that nothing sounds excessive. For example, pushing the Bass and Middle up full does not produce a muddy signal and the Treble up high sounds clean and clear, as opposed to brittle.

OVERALL IMPRESSION:
Mystere can be translated as Mystery (or ‘a religious truth via divine revelation, hidden spiritual significance’), Denis over at Doc Music Station named the pedal after his dog, which I think I like better and shows how personal this pedal project is. Available for purchase direct from Doc Music Station (209 Euro) or via Reverb.com, the price is reasonable for the Mystere because of its sound (and it’s a lot smaller than a JCM800 head), while producing a very authentic tone with amp-like responses. You can place it direct to an amp (clean or dirty), but Doc Music Station indicates that it sounds best in the Effects Return Loop, or direct to a CAB simulator for direct send/mixing to a DAW (which is what I did in the demo video). One thing for certain is that the Mystere is a darn cool looking pedal with the grill and color matching of a Marshall head, as well as the same type of knobs. It can be operated via a standard 9v power supply or a 9v battery (not included).

EASE OF USE:
Easy enough to use, as though working with the JCM800 Marshall head, the Mystere does require some minor tweaking in order to get the degree of tone, crunch and sustain you want. No surprise there. The Master control allows you to crank into high-gain territory while keeping the overall levels as low (or as high) as you wish. This works in conjunction with the Preamp (since the Preamp increases volume as the drive/gain increases). However, as you up the Presence, Bass, Middle and Treble, there also is a modest increase in volume. Presence provides a surprising amount of dirt and bite to the tone and works in conjunction with the Preamp. A good dose of Preamp can sound good, but as you get the Presence to about 9-o’clock or a touch higher you really can hear the dirt kick in. As well, the Mystere functions wonderfully with other pedals, including Tube Screamers, fuzzes, distortions and overdrives – accordingly, you may need to adjust the Preamp level and/or the amount of output of the pedals to get the best mix.

RELIABILITY & DURABILITY:
The Mystere, measuring in at 3.75 x 4.75 inches (9.5 x 12.0 cm), has an obvious Marshall vibe with a smooth finish to its paint. The chassis feels heavy and is made of aluminum (a Hammond 1590BB aluminum case that provides shielding of the electronic card). The LED ‘on-off’ light is far situated from the foot switch and between two knobs (Preamp and Presence). The footswitch has a solid click to it and may be close to some of the knobs, but those are very heavy in construction and should not pose an issue with aggressive stomping. The guitar cable input and output both are located on the sides, but since the Mystere is a somewhat wide pedal there’s plenty of room for stomping without hitting any cables. The power input is located along the side and toward the front, although it does not appear to be an awkward place for strain when switching the Mystere on and off. The plastic knobs with aluminum toppers are of heavy construction and the pots are of good quality when turned. The true bypass Mystere contains some high quality audio components, including carbon resistors, capacitors a Panasonic SMF FC and Silver Mica, as well as PCB double sided plated through holes FR4 with front and back ground plane, Neutrik jacks, and Alpha 16mm faders. Finally, the pedal is protected against overvoltage and reverse polarity.

3 other products in the same category: